Carlos Santana the Legend- From Then Till Now!

He became famous in the '60's and still rocks today! 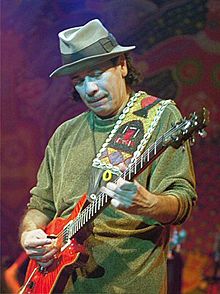 Carlos Augusto Alves Santana (born July 20, 1947) is a Grammy Award-winning Mexican-American Latin rock musician and guitarist. He became famous in the late 1960s and early 1970s with his band, Santana, which created a highly successful blend of salsa, rock, blues, and jazz fusion. Their sound featured his melodic, blues based guitar lines set against Latin percussion such as timbales and congas. Santana continued to work in these forms over the following decades, and experienced a sudden resurgence of popularity and critical acclaim in the late 1990s. Rolling Stone magazine also named Santana number 15 on their list of the 100 Greatest Guitarists of All Time in 2003.

Santana is another legend that shot to fame after Woodstock in 1969. The Woodstock Music and Art Festival organizers had to be persuaded to let them appear before Santana and his band's first album was even released. They were one of the surprises of the festival; their set was legendary, and later the exposure of their eleven-minute instrumental "Soul Sacrifice" in the Woodstock film and soundtrack albums vastly increased Santana's popularity.

'Breezin' - A Duet with George Benson - Two guitar legends, one great performance! Watch as they 'duel' each other with their guitars, (below), and 'Sampa Pa  Ti'  a hit from the early '70's  but recorded during his live performance in Zagreb, Croatia 18th October 1998.(below).

Webmaster's Note - Although the theme of this site is featured on songs from the '50's and '60's, we do get certain requests to feature singers who rose to fame back then and went on to become legends today.