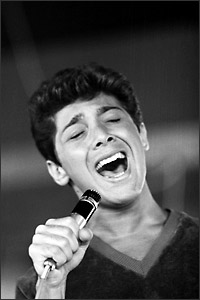 Paul Anka is a Canadian-born American singer, songwriter, and actor of Arab American (Lebanese from the Syrian Orthodox Church) origin. He only became a naturalized US citizen in 1990.

Paul Anka first became famous as a teen idol in the late 1950s and 1960s with hits songs like Diana, Lonely Boy, and Put Your Head on My Shoulder.

He went on to write such well known music as the theme for The Tonight Show Starring Johnny Carson, Tom Jones' biggest hit She's A Lady, and the English lyrics for Frank Sinatra's signature song My Way.

In the 1960s Anka would begin acting in motion pictures as well as writing songs for them, most notably the theme for the hit movie The Longest Day.

From his movie work, he wrote and recorded one of his greatest hit, Lonely Boy. He then went on to become one of the first pop singers to perform at the Las Vegas casinos. Anka returns to Canada several times a year, regularly playing to sold out crowds at the Fallsview Casino in Niagara Falls, Ontario.