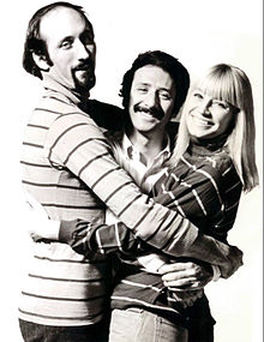 Peter, Paul and Mary was an American folk group formed in New York City in 1961, during the American folk music revival phenomenon.

The trio was composed of songwriter Peter Yarrow, Paul Stookey and Mary Travers. After the death of Travers in 2009, Yarrow and Stookey continued to perform as a duo under their individual names.

They recorded their debut album, Peter, Paul and Mary, in 1962. It included "Lemon Tree", "500 Miles",plus hit tunes like hit tunes "If I Had a Hammer" and "Where Have All the Flowers Gone?".

The album was listed in the Billboard Magazine Top Ten for 10 months, including seven weeks in the No. 1 position. It remained a main catalog-seller for decades to come, eventually selling over two million copies, earning double platinum certification from the RIAA in the United States alone.

The trio broke up in 1970 to pursue solo careers and after Peter Yarrow's arrest and conviction for making sexual advances toward a 14-year-old girl. [Years later, Yarrow received a presidential pardon from Jimmy Carter.]

Travers recorded five solo LPs and did concerts and lectures across the United States. She also produced, wrote, and starred in a BBC-TV series. Stookey formed a Christian music group called the Body Works Band. Yarrow co-wrote and produced Mary MacGregor's 'Torn Between Two Lovers' (No. 1, 1977) and earned an Emmy for three animated TV specials based on their hit "Puff the Magic Dragon."