When this website was being planned, it was decided that Tom & Engel would not be included simply because the two of them were very 'visual' in the sixties and seventies with both having their own TV show aired across the globe. However we received requests to have them included and then we discovered rare footage of the two of them together, so here is Tom Jones and Engelbert Humperdinck!

Tom Jones was a Welshman. 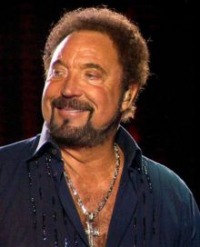 He rose to fame in the mid-1960s, with an exuberant live act that included wearing tight breeches and billowing shirts, in an Edwardian style popular among his peers at the time. He was known for his overt sexuality, before this was as common as it has become in subsequent years.

Is that Tom Jones? Yes, a recent photo taken in 2005, Tom continues to attract audiences of all ages. As of 2008, Jones continues to tour and record. A major portion of the year he regularly performs his show at the MGM Grand hotel, located on the Las Vegas Strip in Paradise, Nevada, USA.

Ultrasmooth balladeer Engelbert Humperdinck was often billed as "the King of Romance".  His dad British Army officer Mervyn Dorsey and his wife Olive were stationed in India when Arnold George Dorsey was born. The family migrated to Leicester, England when he was ten, and a year later he showed an interest in music and began learning the saxophone. By the early 1950s, he was playing in nightclubs, but he's believed not to have tried singing until he was seventeen and friends coaxed him into entering a pub contest.

In 1966, he teamed with an old roommate named Gordon Mills who had become a music impresario and the manager of Tom Jones. Aware that Dorsey had been struggling several years to make it in music, Mills suggested a name change to the more arresting Engelbert Humperdinck, borrowed from the composer of such operas as Hansel and Gretel. Mills also arranged a new deal with Decca Records. And in early 1967, the changes paid off when Humperdinck's version of "Release Me". He was awarded a star on the Hollywood Walk of Fame in 1989 and won a Golden Globe Award as entertainer of the year.

Watch Englbert sing 'Release Me' below.

Did you know that both Tom and Englebert suffered from Tuberculosis in the early days of their singing career? They were both bedridden with the disease for almost a year. Hearing them sing, one would never imagine that.