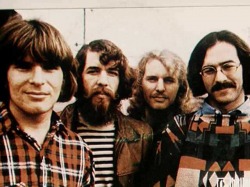 Creedence Clearwater Revival, often informally abbreviated to Creedence or CCR was an American roots rock band who gained popularity in the late 1960s and early '70s with a string of successful songs from multiple albums released in 1968, 1969 and 1970.

CCR sing 'Proud Mary' (above) and 'Midnight Special' (below).
Followed by 'Looking Out My Backdoor' and 'Bad Moon Arising'