Mary Hopkin Sings 'Those Were The Days' & 'Goodbye' [below] 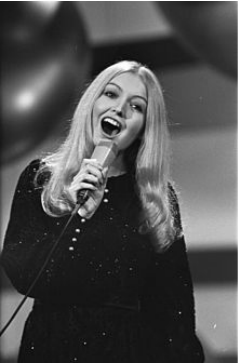 Mary Hopkin, is a Welsh folk singer best known for her 1968 UK number one single "Those Were The Days". After singing on Opportunity Knocks, became one of the stars of The Beatles' Apple label.

Her debut single, "Those Were the Days", produced by McCartney, was released in the UK on 30 August 1968. Despite competition from a well-established star, Sandie Shaw, who released her version of the song as a single that year, Hopkin's version became a number one hit on the UK Singles Chart, and reached number two in the US Billboard Hot 100, where for three weeks it was held out of the top spot by The Beatles' Hey Jude. It sold over a million and a half copies in the United States alone, and was awarded a gold disc by the R.I.A.A. Global sales topped eight million.

Born in 1950 in Pontardawe, Mary Hopkin's singing began while she was still a schoolgirl. Starting out in a local folk band, the Selby Set & Mary, she also released several Welsh-language albums on local label Cambrian Recordings.

Mary's fortunes changed dramatically in 1968 following an appearance on the TV talent show Opportunity Knocks, where she performed Turn Turn Turn. It was indeed to be a turning point in her life.

She won the competition, and the following Monday received a telegram asking her to call Apple Records. She did, and spoke to Paul McCartney, who asked her to come up to London the next day for an audition.

Mary recorded eight songs that day, and was offered a recording contract on the spot. The song Those Were The Days was chosen as her first single, and it looked to be an instant success - her success in Opportunity Knocks had already made her a household name. She was just 18 years old.
More at Mary Hopkin Official Site
Image via Wikipedia

Mary Hopkin's next single was "Goodbye" written by Paul McCartney released in March 1969. It reached number two in the UK Singles Chart. It was kept off the top of the charts by The Beatles' single "Get Back". "Goodbye" has never been officially released by The Beatles, although a demo version can be found on some of their bootlegs.
[Source:Wikipedia]