The Man With The Golden Voice 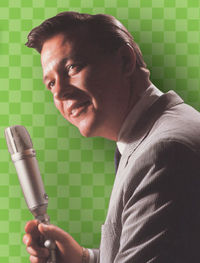 Born Terence Edward Parsons in London. Affectionately nicknamed "the singing bus driver" (because one of his many occupations prior to achieving fame), he got his first break in 1956 when he became a featured vocalist with the BBC Show Band.

In 1960, George Martin was looking for a singer to record a Frank Sinatra-styled ditty that would open the album Songs For Swinging Sellers, to be used strictly as a guide for Peter Sellers to imitate.

Martin offered it to Monro, and when Sellers heard the recording he decided to use it, but billed Monro as "Fred Flange." Though it was a demoralizing experience at the time, the incident developed into a lifelong friendship with Martin, who subsequently asked Monro to begin recording with him for EMI's Parlophone record label. Their second single, "Portrait of My Love," reached number two in the UK Singles Chart.

By the following year, he had been named Top International Act by Billboard magazine, and his follow-up hits included "My Kind of Girl" (1961), "Softly as I Leave You" (1962) and the song from the James Bond film, From Russia with Love (1963). For the latter, his vocals were not used in the opening titles, as became the standard for the series; they were heard on a radio during the film and over the final credits. At the Eurovision Song Contest, singing "I Love the Little Things," he finished second behind Italy's 16-year-old Gigliola Cinquetti), despite what author and historian John Kennedy O'Connor describes in his book The Eurovision Song Contest - The Official History as an "excellent performance of the only English language song of the night."

Monro died from liver cancer in 1985, leaving a widow, Mickie, and three children: Mitchell, Michele, and Matthew. Mitchell, a professional pilot, died of a heart attack in 2004.- Wikipedia

Watch the BBC Documentary on his famous song 'Walk Away' (below).
Webmasters Note -
Monro was added following a request from a subscriber. It was only after having done research that we found that there were so many songs that were made famous by Matt. Regretfully live videos are limited and probably still held in copyright.