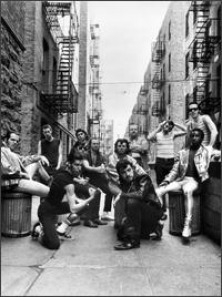 The group began singing as part of the longstanding (and still-extant) Columbia University a cappella group The Kingsmen but changed their name due to the Pacific Northwest group of the same name, famous for covering "Louie, Louie". The name comes from the refrain of the classic '50s hit "Get a Job" ("Sha-na-na-na, sha-na-na-na-na...") by The Silhouettes.

Conceived by George Leonard, then a graduate student in English Literature, Sha Na Na began performing in 1969, at the height of the hippie counterculture, and achieved national fame after playing at the Woodstock Festival. The group helped to spark a 1950s nostalgia craze.

The band remains well-known for their tracks on the Grease soundtrack, including "Those Magic Changes", "Hound Dog", "Rock & Roll Is Here to Stay", "Blue Moon", "Born to Hand-Jive" and "Tears on My Pillow"

Bowser at his 'funny' best (above) with their version of 'Unchained Melody' and Chico (below) with 'Teenager In Love'. "Bowzer" Bauman also continues to tour under his own banner. David "Chico" Ryan unfortunately has left us.